Gooseberries have for some reason been a little out of fashion and quite hard to buy the fruit. For years you have only been able to buy them in most supermarkets in tins or yogurt. Thankfully things seem to be changing and when they are in season they do seem to more available fresh.

However, if like me you are a gooseberry fan then the only way to get hold of significant quantities is to grow your own. Choosing the right variety is important.

Invicta is a good variety for beginners. Whilst it doesn’t top the flavour chart it is a good variety to grow as it is mildew resistant, has large berries and very high yields, it is almost bomb proof and has the RHS award of garden merit at the time of writing.  Invicta is a variety for cooking as it is quite tart but there are other varieties which can be eaten fresh. If you buy fresh gooseberries when in season then it is likely to be Invicta.

Invicta is used as a cooking gooseberry with a similar tartness to rhubarb.  Top and tail the gooseberries, lightly simmer with a little water and sugar to taste you will get a puree. This can be folded into cream or yogurt to make a fool or top a meringue.  Alternatively mix whole gooseberries with sugar and top with crumble or pastry and bake for the best crumble or pie filling. Cooked like this Invicta will mainly hold its shape.

Invicta has the double advantage of being both mildew resistant and high yielding with established plants yielding 2-4kg per bush from around late July. It has the RHS award of garden merit at the time of writing. It is a great gooseberry for first timers. 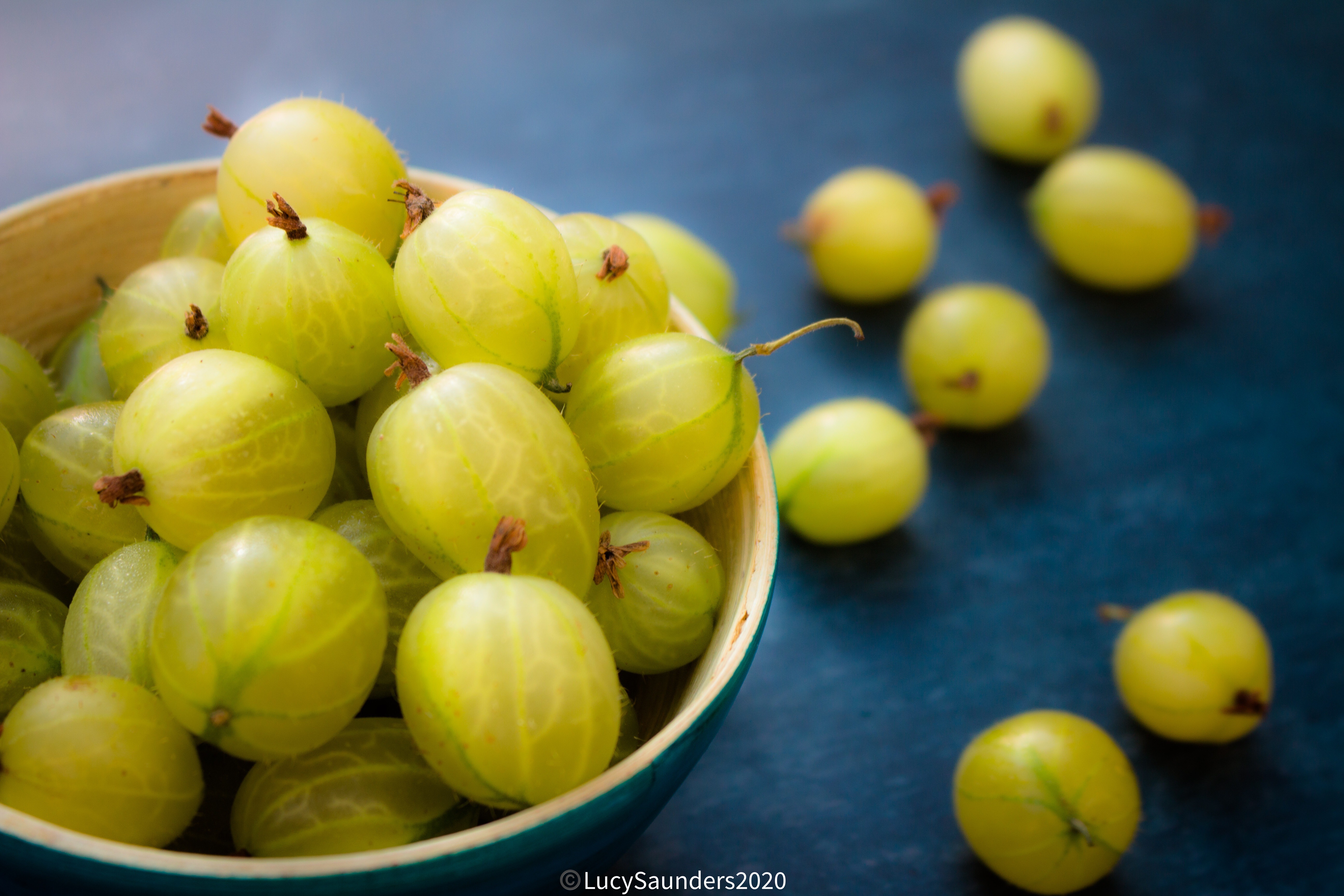 Gooseberries are relatively unfussy in the site that you choose, as long as it is neither excessively shady or waterlogged. Pot grown plants can be planted all year around or plant bare rooted plants in late autumn to early spring, making sure that the soil isn’t too water logged or frozen. If you cannot plant your bare roots immediately then heal them in to some dampened compost or some light free draining soil until the weather improves.

Before you plant dig in well rotted manure or compost. Make sure the planting hole is big enough that the roots can lay out well. Plant to the depth that the bush was originally planted which will either be level with the pot or you should on the barerooted plant see a slight colour change between what was above and below the soil previously. Gently firm the soil around the bush. Plant each bush 4-5 ft apart.

In spring mulch with manure, compost or bark to conserve moisture and add nutrients. You shouldn’t need to water except in very dry conditions. In drought water well once every two weeks.

In winter/early spring top dress with a high potash feed to encourage flowering. Carefully prune damaged or crossing branches. For Gooseberries that are prone to mildew try to create a goblet shape with a clear centre which will allow greater air circulation and light to get in to the centre of the plant. Remove any branches during the year which show signs of mildew and burn or dispose of away from site.

Gooseberries are relatively easy to grow if you watch out for three things, birds, gooseberry sawfly and mildew. Birds can be discouraged using netting and you can buy mildew resistant varieties. Gooseberry sawfly can be discourage by growing under insect mesh or by examining plants from April and through out the growing season for small pale green caterpillar like larvae. There are some nematodes that will control sawfly. You can remove them by hand if you only have a small infestation. Sawfly can devastate a bush so you do need to keep on top of them. Some people have had success covering the ground under the bush with paper or lime and then shaking the bush, the larvae can then easily be spotted and removed. Covering the ground under the bush in March with coir matting or weed control fabric and sticky tape around the base of the bush may stop overwintering larvae climbing the stem. In one of the most best series for food growers to watch The Victorian-Kitchen-Garden the tried a technique of firing a rifle through the bushes, the shockwave knocking the sawfly to the ground. This is probably not something that can be recommended!