I spent some time trying to find a little about this modern variety of potato including how it got its exotic name. Is it named in honour of the film, the city? Does it originate from Casablanca (unlikely)? If anyone finds out then do let me know.

What do we know about this mysterious little potato? It is a first early which means it is one of the earliest potatoes to be ready (also called new potatoes) although it is not as quiet early as rocket and swift. Harvesting is in June, although a little earlier if you have been growing under glass. It is a handsome, fairly disease resistant and none of my potatoes harvested so far have had slug damage so it can be a winner on the show bench.  Maybe my here’s looking at you spud is not too far from the mark in its naming? It’s more floury than waxy so doesn’t make a good salad potato but will boil well whole or steamed/sautéed. Large tubers will make good wedges. 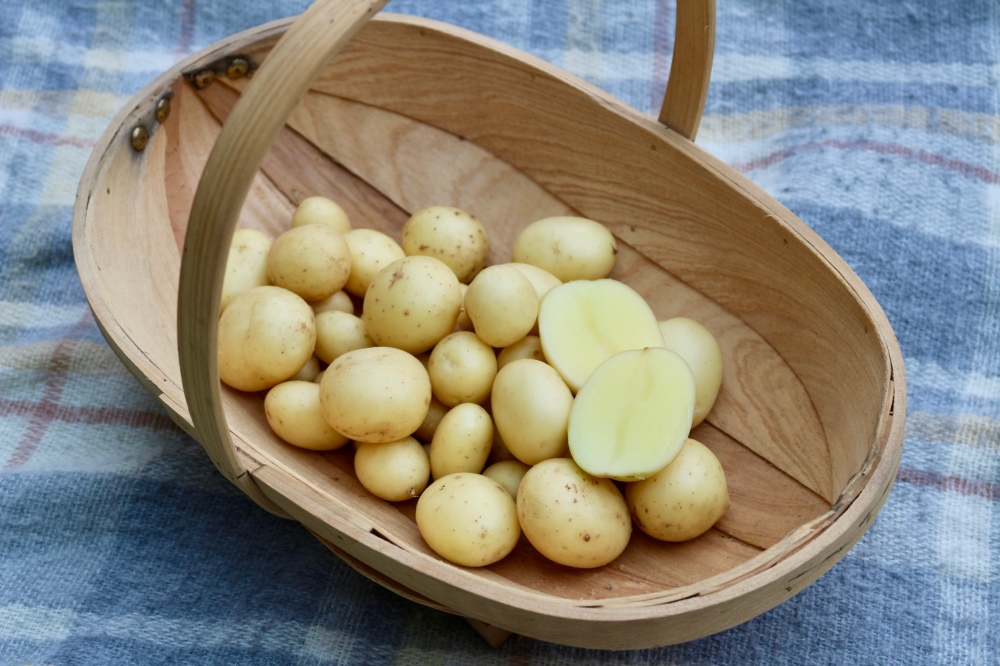 When your seed potatoes arrive, remove them from the packaging and lay eye side up in egg boxes or on paper in a light, cool but frost free place.

In late march – early April dig a narrow trench about 10cm deep.  To improve yield you can line with compost or well rotted manure but it will make the potatoes more prone to slugs. You can water in some nematodes if it is warm enough who will infect any nearby slugs and will offer some protection for 6 weeks. You can repeat by watering them in when earthing up but make sure you are watering the soil not the foliage.

Space the seed potatoes 40cm apart in rows 30cm apart. Cover the potatoes with the soil from the trench. When the halms appear above the surface you will need to cover them with earth if there is sign of a frost coming. When they are about 20cm high you will want to draw soil about 15cm up the stems in to a flat topped ridge. This will reduce the likelihood of getting green potatoes due to light exposure as these are toxic. You can also earth up with a mulch of compost or straw.

Potatoes will not need much watering except in the driest of weathers when you would want to water well once a week. As a rule more water will lead to larger, but also more watery potatoes.

You can buy specialist potato fertiliser but a sprinkling of organic bone meal dug lightly in to the soil is probably all they will need, especially if you have dug in compost or manure on planting or have earthed up with compost.

Start harvesting in June. One tuber will yield 1-2 servings grown early in the season in pots, 2-3 servings if grown later in the ground. Potatoes will vary in size somewhat but will not grow bigger than a small hens egg.

Casablanca is fairly disease and slug resistant. It is harvested early so should not get blight.

At the time of publishing Casablanca holds and RHS Award of Garden Merit.

Casablanca is a new potato.  It is more floury than some new potatoes therefore it is best suited to steaming or sauté. Although you can gently boil smaller tubers whole in their skins. Don’t slice them first as they will fall apart. Larger ones can also make good wedges. The older the potato is the higher starch content it will have.