Love beetroot but fed up with you and your kitchen looking like a bloodbath after? If so then you could try giving yellow beetroots a try. There are two main yellow varieties, Burpees Golden which dates back to the 1970’s and Golden Detroit from the 1820’s.

Golden Detroit is a sweet beetroot and can unlike some of it’s more earthy cousins be eaten finely sliced, grated raw or used in smoothies. It can also be roasted, steamed, boiled or pickled, just like purple beets. You can also use the leaves as a substitute for chard or spinach. The nutritional profile of yellow beetroot is similar to that of red beetroot.

Being an heirloom variety Golden Detroit has slightly smaller leaves and  is longer to crop then some of it’s more modern relatives. This in the UK, in what was quite a gloomy and wet year, mine took about 120 days to get to a harvestable size but they stood well and so there is no need for successional sowing. They also store for a long period of time out of the ground. 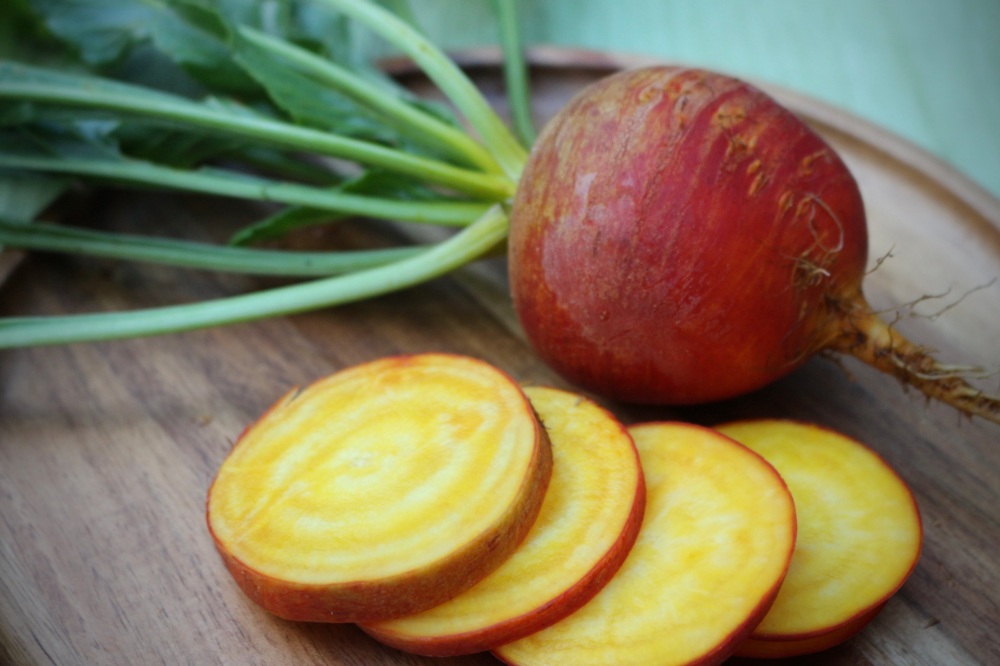 Beetroot are one of the easiest crops to grow if you get the basics right.

Before sowing add a general organic fertiliser like blood fish and bone to a sunny spot in your garden and rake in lightly. Sow in drills 2.5cm deep from Mid April to July. Sow a couple of seeds, 10 cm apart with 30 cm between each row. Only sow as much as you think you could eat or preserve in a month.

Cover lightly with soil and water gently. Water gently every couple of days if the weather is dry until the seeds emerge. You will likely get several seeds germinating so thin to one plant per 10 cm as soon as they are about 3cm high. You can use thinings in salads. If you are feeling a bit lazy you don’t have to thin but it will take the beets longer to get to a harvestable size if you do.

After that they will look after themselves. If it is very dry water well, once every week – two weeks. Hoe lightly between rows to keep weeds down. If you are growing show beets then you can feed with an organic high nitrogen fertiliser but for the kitchen this isn’t really needed.

If you want to sow earlier then you can do so under fleece protection from Mid February or in modules in a green house to plant out in March. Late sowings either need to be pulled in October and preserved or stored with foliage in sand or compost in a cool frost free location. In warmer parts of the UK you could cover with fleece and leave in the ground.